Detectives and investigators must obey all laws while conducting investigations. They must stay updated about privacy laws, as well as other federal and state laws affecting their work. Often private detectives must make judgment calls when the legality of certain surveillance methods is unclear. They must collect evidence legally, so it will be admissible in court.

Many private detectives and investigators become specialists. For example, those specializing in intellectual property theft investigate piracy and provide information to be used in law suits. Other investigators specialize in finance, usually assigned to search for missing financial assets. They collect information through interviews, surveillance, research, and the examination of public documents.

The following are private investigative specialists:

Investigators usually work alone, but sometimes while conducting surveillance or when trying to avoid being identified, they work in groups. Since detectives often confront people, their jobs can be dangerous and stressful. When investigators have bodyguard responsibilities they often carry firearms.

Investigators who run their own agencies must often deal with demanding and upset clients.

Criminal Justice Degree Finder
Search our database of online and campus-based criminal justice programs.
Licensure
Most U.S. states and the District of Columbia require anyone working as private investigators to become licensed. Licensing requirements differ by state. However, South Dakota, Wyoming, Mississippi, Idaho, Colorado, Alaska, and Alabama do not have specific licensing qualifications. Certain states have very detailed and specific licensing requirements, while others only have a few. 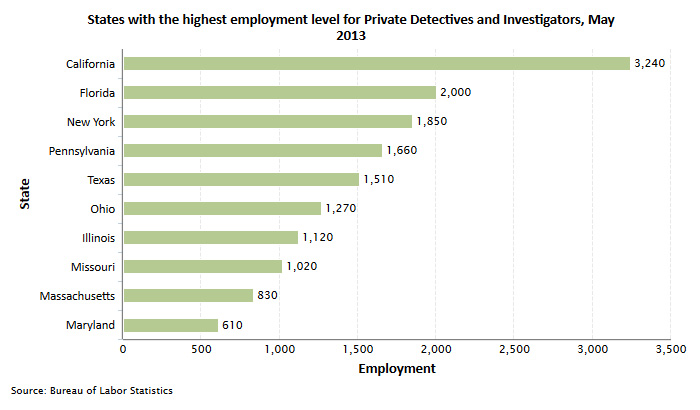