Judges and magistrates apply and supervise legal procedures. They preside over all types of cases. Judges must ensure that people receive fair trials and their civil rights are protected.

Judges are responsible for presiding over court proceedings and listening closely to attorney arguments. Judges determine what evidence can be permitted in court as well as what type of testimony can be presented. Judges are responsible to make sure court rules are followed as well as determine how the law applies to unusual circumstances, deviating from established procedures.

Judges preside over pretrial hearings. They listen to each parties' complaints and determine whether the current evidence presented justifies a trial. Judges also determine whether people accused of crimes should be released from jail prior to a trial, and in civil cases, judges place restrictions on the behavior of each party involved until the trial is over.

Juries are selected for both civil and criminal cases. Judges provide jury instructions. If the law does not require a jury and defendants or waive their right to a jury trial, judges are responsible for issuing a verdict and determining a punishment in criminal cases. In civil trials, judges determine which party pays damages.

State court judges, also known as municipal or county court judges or justices of the peace, only preside over certain cases. They usually preside over small claims cases, misdemeanors, traffic violations, and pretrial hearings. Some states permit these judges to preside over probate, contract, and other specific types of cases.

Administrative law judges, also known as hearing officers or adjudicators, issue rulings for government administrative agencies. For example, these judges would be responsible for determining whether a person would receive social security or workers' compensation benefits, as well as judging whether a company complied with environmental or other regulations.

Arbitrators, mediators, or conciliators specialize in alternative dispute resolutions intended to settle conflicts out of court. These hearing are confidential and private, and if a settlement is not reached, conversations between the parties would not be admissible if the dispute was taken to a court. Arbitration is either compulsory or voluntary. Parties deciding to utilize compulsory arbitration present their arguments to an arbitrator for a final, nonbinding decision since either party can appeal the decision to a court. Parties utilizing voluntary arbitration present their arguments to arbitrators for a final and binding decision.

Specialized business professionals and lawyers usually work as arbitrators. People working with arbitrators notify them of the problems to be resolved and propose relief to be awarded.

Mediators serve as neutral third parties to resolve conflicts outside of court. Mediators are often consulted so people can maintain relationships. Mediators suggest courses of action, but the parties determine how to resolve the conflict. These proceedings are confidential, and if a settlement is not agreed upon, the parties can pursue other options. Parties to a mediation dispute usually decide in advance how to split the costs of the mediator, but many mediators volunteer or are court appointed.

Conciliation or facilitation is another form of mediation. Conciliators assist parties attempting to settle a dispute, and they must decide prior to meeting with a conciliator whether they will be bound by his or her decision.


Work Environment
Judges, magistrates, and other legal workers spend most of their time in law libraries, offices, or courtrooms. These jobs are safe but can be very tiring since they usually sit all day in courtrooms or offices. Most judges work 40-50 hour work weeks. Some judges with little jurisdiction work part time.

Arbitrators, mediators, and conciliators spend their time in offices and conference rooms where no public record is kept of their conversations with parties resolving disputes. Some mediators travel to meet with their clients while some work at home. They usually work 40 hour weeks but sometimes work extra hours during contract negotiations. 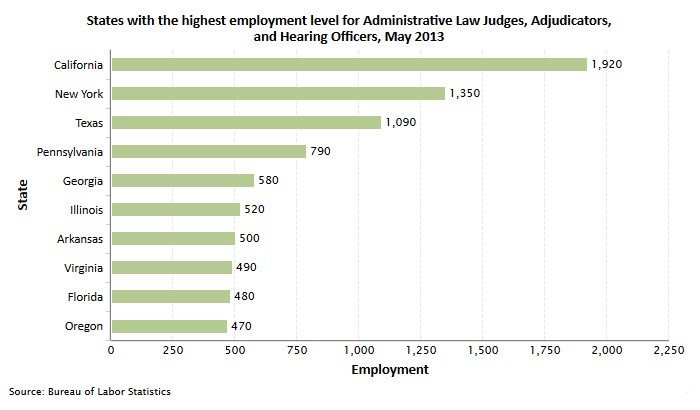