Cognitive psychology is a branch of psychology that focuses on how the mind works. The discipline aims to understand mental process, such as learning, perception, attention, reasoning, memory, language processing, problem solving, decision making and conceptual development.

Much of psychological theory and study adopts a behaviorist approach. That is, a focus on external observable (stimulus and response) behaviour that can be measured objectively. Behaviorists believe that internal behavior cannot be accurately studied because it cannot be objectively measured or observed – we cannot see what's going on in a person's mind.

In contrast, cognitive psychology focuses on the study of internal mental behaviour and mental processes, and believes these internal behaviours and processes can be studied and observed using various scientific experiments. Cognitive psychology is based on the assumption that mediational process occurs between stimulus (input) and response (output). 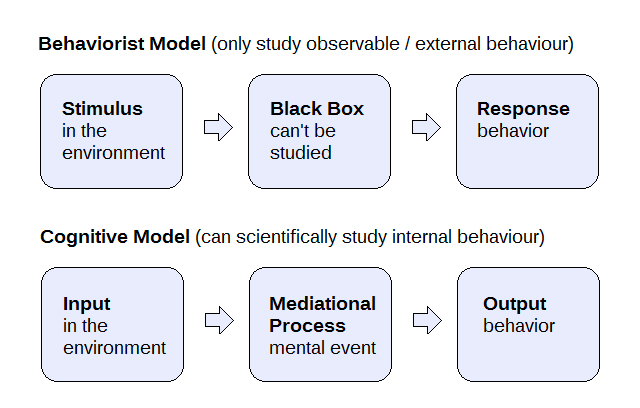 
Mediational/Mental Processes
Cognitive psychologists focus on the study and research of mediational/mental processes. These process include, but are not limited to, the following:

In recent years, cognitive psychologists have begun to play an important role in court room trials since they specialize in memory retention, and because eyewitness testimony is such an important component in jury trials. Research has illustrated that people witnessing events as they happen often forget, or misinterpret what they see. As a result, cognitive psychologists are frequently called upon to testify and participate in trial proceedings.

Cognitive psychologists tyically focus in one of three areas: research, teaching or treatment. Those involved in treatment may be required to obtain a license in the state where they're employed. To obtain a license, applicants must hold a doctoral degree in psychology, have completed a 1-year APA accredited internship and pass an exam administered by their state's psychology board.

Certain research and teaching positions may not have state licensure requirements.


Pay
Pay for psychologists vary widely. How much a cognitive psychology can earn is dependent on several factors including level of education, career path, position and experience. According to the U.S. Bureau of Labor Statistics the median salary for all psychologists is roughly $87,000. Psychologists working as professors at universities earn between $74,000 and $85,000 a year on average, while psychologists employed by scientific research centers and physicians' offices make between $100,000 and $110,000 a year, respectively. The highest paid psychologists work as industrial-organizational consultants with large corporations and typically make over $115,000 a year.


Job Outlook
As cognitive psychologists are qualified to work in academic, clinical, business and research environments, there is usually not shortage of job opportunities. However, the majority are employed in teaching and research positions as major colleges and universities. Recently, cognitive psychologists have been hired to work in the fields of organizational psychology, software development, usability analysis and human-computer interaction.

Overall, the job outlook for cognitive psychologists over the next decade is strong.